Happiness does not consist in pastimes and amusements but in virtuous activities.

The following story appeared in the Desert Dispatch the morning of June 17, 2009

BY EUNICE LEE
STAFF WRITER
BARSTOW
• English teacher Don Braden has worn a tuxedo to class on the first day of school for several years.
It’s a tradition that the Barstow High School teacher has become known for.
Why does he do it?
Vinney Williams, yearbook and audio/visual teacher, thinks Braden is setting the tone for the rest of the year.
“It showed what he thought of the place,” said Williams. “He came almost ready to celebrate.”
As the high school closes out its last day before summer vacation Wednesday [today], Braden will end his 45 years of teaching in the Barstow Unified School District.
According to history teacher Dwight Anders, a colleague of 23 years, Braden will leave an indelible mark on the high school.
“He’s played an important part of the school ever since I’ve been here,” Anders said.
Twe l f t h - g rad e r Tommy Dittman said some students get scared when they see Braden’s name on their class schedule. The first time Dittman had to write an essay for Braden, he had to address the perplexing prompt, “Why, why?”
Dittman muddled through the essay, which aimed to get the students thinking in more abstract and philosophical terms.
“He’s not your average teacher,” said the 17-yearold. “ ... He doesn’t spoonfeed you — he makes you work for it.”
Braden acknowledged that sometimes he tosses out ideas that go a little over his students’ heads. But that gives them a chance to learn something new, he said.
“They have to do something they haven’t done before,” Braden said.
Senior Kristy Smith was a little intimidated by the thick books in Braden’s class. She quickly discovered, however, that Braden’s class, while an English course, covered topics ranging from environmentalism to episodes of “Star Trek.”
The 15-year-old found herself becoming interested in real life topics she had never cared about before, like global warming.
“It was almost a mixture of class and life itself,” she said.
Braden started in the district at then-Kennedy High School in 1964 as a Latin teacher. When the two high schools merged, Braden taught 12th-grade English and has been the department chairman a total of 19 of his 45 years. He’s also coached some combination of track and cross country for almost 30 years.
According to Associate Principal Scott Godfrey, Braden has profoundly shaped the English curriculum and has been a campus leader.
“That’s going to be a void for us as a staff,” said Godfrey.
At times, Braden has been a force to be reckoned with. Anders said years ago, he and Braden, who have opposite political views, were engaged in a heated debate in the teacher’s lounge that got so intense that a new teacher reported a fight.
“He’s not shy about telling you how he feels about things,” said Anders, who added that they haven’t let their differences get in the way and have simply agreed to disagree.
As school ends, Braden will pack up his longtime second home, room 71. Life has revolved around teaching and students, said Braden, and upon retiring he and his wife plan to visit their two grown children (both teachers) and do some traveling. Braden will also be focusing on getting his second novel, a science-fiction book, published.
CONTACT THE WRITER:
(760) 256-4122 or
elee@desertdispatch.com 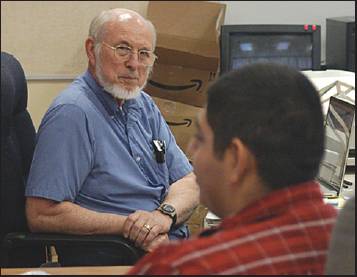 Barstow High School English teacher Don Braden (left) takes a moment to listen to a student during class. Braden will retire from 45 years of teaching in the district at the end of this school year. > STAFF PHOTO BY EUNICE LEE 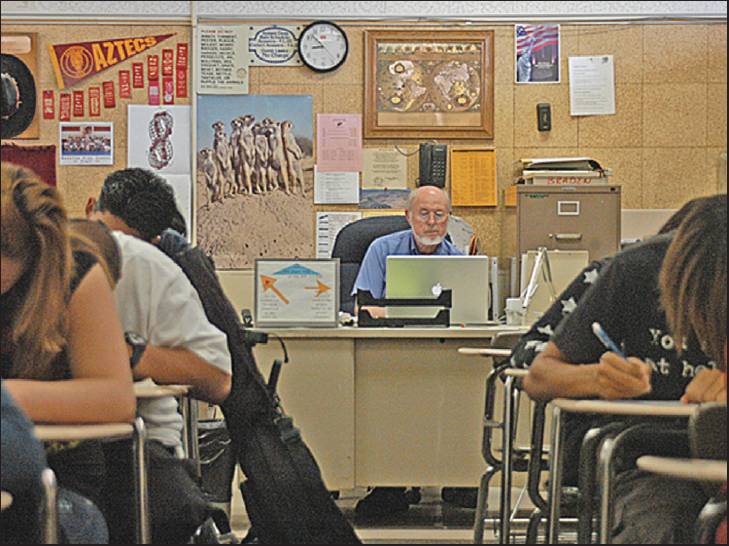 Don Braden (center) estimates that he’s taught 10,000 students over the years since he began as a Latin teacher at then-Kennedy High School in 1964. > STAFF PHOTO BY EUNICE